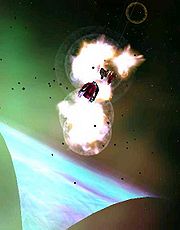 A scout uses a minefield to devastate an enemy bomber coming through a wormhole.

Allegiance is a free, online, multi-player space simulation game. You pilot spacecraft, flying in a team with other players, defending and attacking sectors in space. Your team is led by a Commander who makes tactical decisions and invests in technology and bases. Flight and combat is done in first person view in a 3D environment, with a real-time, top-down 'Command view' of your immediate surroundings also available.

While this sounds simple enough Allegiance is anything but an easy game to learn, even with its relatively basic control scheme and its simplified flight model. Allegiance is about tactics and coordination; knowing your ordnance and, most importantly, knowing where to be and what you should be doing there. Given the enormous amount of factors to reckon with, it takes the average player somewhere between 3 and 6 months to firmly grasp the basics.

On the plus side, Allegiance is full of interesting ways to turn spaceships into debris. Depending on the technology path your Commander has chosen you might fly stealthcraft, hiding and sniping at your unsuspecting enemies from far away. You might fly the interceptor, the king of short-range dogfights. Perhaps you might pilot a bomber, with other players manning the anti-fighter turrets on your ship. Or you could be the infinitely useful scout that spots enemy movements, repairs friendly vessels, and can even deploy minefields to devastate an enemy attack.

Allegiance is a great game to play because:

There are, on average, about thirty people participating in a game of Allegiance (15 per team). A typical game lasts between thirty and forty-five minutes, although games of more than 2 hours in length are not uncommon. The most commonly played server currently has nine different factions (each of which has at least five different techpaths the Commander can choose from) and over 40 playable maps.

No two games are ever the same.