SOV is a low-key squad/clan that started with StarCraft, made famous in Allegiance for the anti-cheat and authentication software. In fact those were the result of one player, SOV_Vencain, who produced a number of utilities who let Allegiance survive through the dark ages. 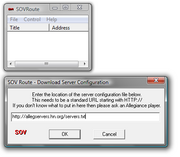 SOVRoute
Released on February 18th, 2001, SOVRoute allowed the community to play when the lobbyserver was down using the LAN function and server IP addresses to connect directly to servers. IP Addresses of game servers were added by their administrators to a website, where they were automatically retrieved by SOVRoute.

SOVRoute is to date still usable as an emergency system, although little or no documentation is currently available on the topic.

Released on June 21st, 2002, SOVLogin was created to authenticate players. This continued the SOVGuard/SOVLog feature set and included behind-the-scenes corresponding server-side components for use by Thalgor and Pook to enable authentication and anticheating measures. Players who were not authenticated via SOVLogin were unable to connect to the lobby server.

Released on September 1st, 2001, SOVLog contained the features of SOVGuard except for crashguard protection, as by then version 1.25 of Allegiance fixed the bug. The remaining features included chat logging, JPEG screenshot captures and name color stripping.

Dated July 9th, 2001, SOVGuard was a security program that prevented out-of-range voicechats from causing a crashguard.

Publised on April 27th, 2001, SOVShowCG was a small command-line program which analysed the crash guard HTML page. It told you if you were crashed by a malicous player or by a normal bug.

After this system was hacked and SOV_Vencain went missing, Pook developed ASGS as a replacement authentication system.