A custom map is a .igc file created by a player using the Allegiance Map Editor (AME). If a server host likes the map they may add it to their server, and then anyone playing on that server can select the map to play on. There is a limited number of custom maps that can be added to a server.

Allegiance Map Editor is a program created by KGJV to enable players to create new custom maps for Allegiance. To install AME you will need to download the installer which can be found in the FAO downloads page.

Unclear alephs - the second picture demonstrates how they're actually connected

It is suggested that maps are kept symmetrical as this ensures that the maps are evenly balanced for both teams. Some people prefer 2-axis mirror symmetry whilst others are happy with rotational symmetry. It's the choice of the map maker, but if players don't like the layout they aren't likely to play the map.

Keeping the sectors spaced out makes it easier for the players, and more importantly the commander, to click on the different sectors. If you have several sectors in a row horizontally, offsetting them stops the 'ship dots' getting cluttered - HiHigher is a good example of a map that does this.

Try to make your aleph links as clear as possible when viewed on the minimap. Try to avoid alephs that cross and look messy. At all costs avoid having an aleph that crosses behind another sector but doesn't join to it, as shown in the picture to the right.

The right hand side is the main editing screen. You use this to edit everything within a sector - bases, alephs, and asteroids.

In the lower left is the minimap. You use this to create new sectors, move sectors, create alephs and select sectors for editing. Note that this minimap uses a different x-y ratio than the Allegiance minimap and your map can look skewed. See below for more details.

The top left has a list of sectors within your map, and some other buttons we will cover later. You can use this to select sectors.

Along the bottom are file options: New, Load, Save, etc.

For your map to be functional each team needs a sector defined as their "Home Sector" and a Garrison in that sector (Someone verify that you need a base, and if so what kind of base. I guess that as long as it's a garrion or starbase then it gets overwritten with your faction's starting garr when you play?). To define a sector as a Home Sector:

Note that you do not have to add asteroids etc. to every sector.

If you add any asteroids to the sector, then the server will not add any additional asteroids of any kind. Please refer to the Asteroids section below. Only adding an asteroid will remove the random rocks, you can add bases and alephs without affecting it.

You can mix and match random sectors with custom sectors in the same map.

The location of the alephs in the Sector View shows the approximate location that will be used in the game - the actual location will still be randomised. 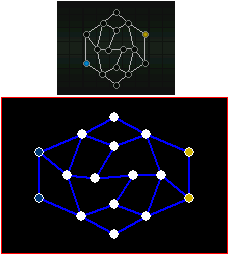 The disparity between the AME and Allegiance minimaps. As you can see, the in-game minimap has been "squashed" because the AME minimap uses a slightly different scale.

If you double left-click on the sector in the Minimap or Sector List; or right-click anywhere on the Sector View and select properties; then you will get a new window where you can edit the Sector Properties.

Alephs, Asteroids, and Bases have some properties in common that are covered together in this section. In each case, double-clicking them will bring up their properties window.

On the left is the object's X, Y, and Z co-ordinates. Moving the object around in the sector view will automatically change the X and Y co-ordinates, but you will have to edit the Z co-ordinate manually to change it.

Changing them will change your orientation, but I have no idea what these numbers really mean.

Changing them will change your spin, but I have no idea what these numbers really mean.

Radius defines how big the object is. A regular aleph has a radius of 100.

You do not need to link two sectors using just one aleph. You can repeat the process to add another aleph link. More if you prefer. You may wish to colour code them (using the aleph render property) so players can know which one is which.

You can link a sector to itself by left clicking on the sector view and dragging.

The default size of all Alephs created in AME is 200. This makes them appear very large in game compared to what players are used to, and many players dislike them due to their deceptive distance, and the difficulty in camping them. It is worth taking the time to make alephs have radius 100, preferably by using the template as described below.

You have two different coloured alephs to choose from - brown (plnt42) and blue (plnt19) - and you can use this to give certain alephs 'extra importance'. A common practice is to use brown ones for alephs leading to the teams' home sectors, and blue for normal alephs.

If you want to create an aleph that is in a fixed position in a sector and will not be randomised add a * to the front of the aleph name. Static alephs can be made mass limited by adding both the * and the + :value.

To create an aleph that will only allow ships of a certain mass to pass add a + to the name and a : after followed by a number value for the mass the aleph is limited to. Note that drones will pass any aleph limited to a mass above 0 and they will attempt to pass a 0 limited aleph. Autopilot will also try to pass through an aleph that is limited to a mass the ship cannot pass. Mass limited alephs can be made static by adding both the * and the + :value.

Warning: If you add any rocks to a sector then the server will not generate random rocks for that sector. In other words, if you're gonna add any rocks you have to add them all - normal asteroids, helium asteroids, and tech rocks.

As such this section is for advanced users who wish to make a complicated map - for simple maps just leave the sectors empty and the server will generate the rocks.

You have two options for adding rocks - one at a time, or in clumps (produces regular asteroids only). To add a clump select "Add rock -> Asteroid layout". This will bring up a new window:

Thorium was a 4th tech rock type that was never used, left over from beta. I don't know what will happen if you add it.

When you add a helium rock AME gives it a random amount of He3 that is far higher than normal. To create custom He3 rocks with normal values you have to input the He amount manually. But first you need to know how much is a "normal" amount for your map.

In a normal game the Total Money that the Game Controller chooses is divided evenly between all the helium rocks in the map. If he selects a large map there will be more sectors, so more helium asteroids, so less helium on each rock. For reference, most cores give a map 3000 units of He3 at Medium (1.0). The number in brackets is a multiplier - if you set it to High (1.25) the 3000 units will be multiplied by 1.25 to give 3750 units.

Given these three factors you can decide how much He3 to provide on each of your custom rocks. As a guideline, work out the He3 per rock on your map assuming normal/medium settings. This is easily done using the following calculation:

This will give you a baseline for your helium rocks. You may want to adjust it up and down slightly, but at least you'll be in the right ball park.

Templates can be used to apply custom properties to everything at once. Generally you can set everything except the name and location, and then apply that setting to all objects in the sector, or everything in the map. For instance, you could set all the alephs to radius 100 and signature 1 in one go.

When you're editing an asteroid you can choose to use a rock template, which will apply those features to the asteroid. For instance if you choose "Uranium template" it will check the uranium feature, use the hotrock icon, and check the 'display name' checkbox.

This allows you to rename all the sectors randomly by importing names from a .txt file.

All objects (alephs, bases and rocks) can be set to rotate via their properties screens. By default rocks will rotate but Alephs and bases are static.

If you set an aleph to rotate then any ship exiting will pop out travelling in the direction the aleph was facing at the time - making it a lot harder to camp (or drive through in formaton)!

Bases set to rotate will rotate about their centre point. This makes manual docking harder and AI ships will not be able to dock at all.

Just because a team doesn't have a base in a sector doesn't mean you can't set it to "belong" to them. What this does is affect the resources placed in that sector by the game - home sectors have less helium and/or techrocks than normal sectors, depending on the "Resource" level chosen in the game settings.

You may wish to have more than one starting base for each team to avoid activating sector overload when people first launch at the start of the game, especially for larger games. The most common solution is to add a second Garrison sector for each team, although other bases can also be used.

With multiple Garrisons miners and constructors will launch from the first Garrison you create in the map for each team. Keep this in mind if you want to keep a symmetric map.

You can make an empty sector by placing a normal rock a long way out of the centre of the sector and giving it a very low sig.